A little of the history of Aeroliner Outboard Racing

Aeroliner Race Boats was started in the mid 1960's by brothers Alan and David Van Weele.  Alan started boat racing in 1955 with the purchase of a new Mercury Mark 20H and a new Speedliner Corsair Model 510. David originally crewed for his brother but by 1959 he had his first boat, a used Bathtub Sid Craft with a KG4H. They both raced in the Northeast with APBA and locally on Long Island with the Eastern Outboard Racing Club. Mainly racing AU, BU, ASH and BSH and occasionally running a MOD class. In 1965 a trip to St Joseph, MO resulted in the purchase of one of the last Speedliner A/B boats constructed by General Marine. While loading the boat on the roof of Dad's car we were asked if we were interested in purchasing the plans and patterns for the boat. Well, it did not take long to start AEROLINER  after that trip. 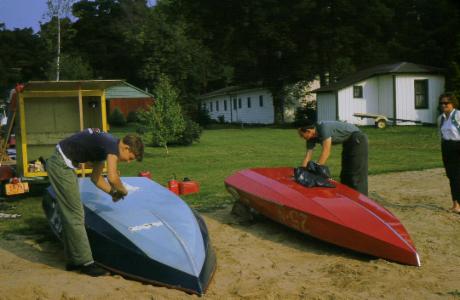 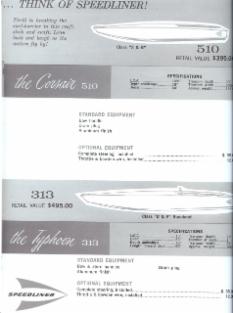 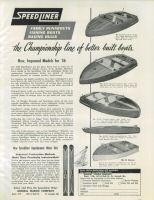 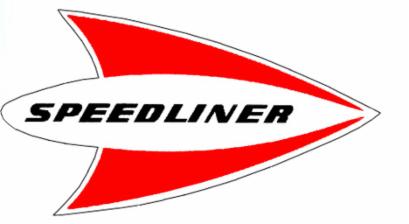 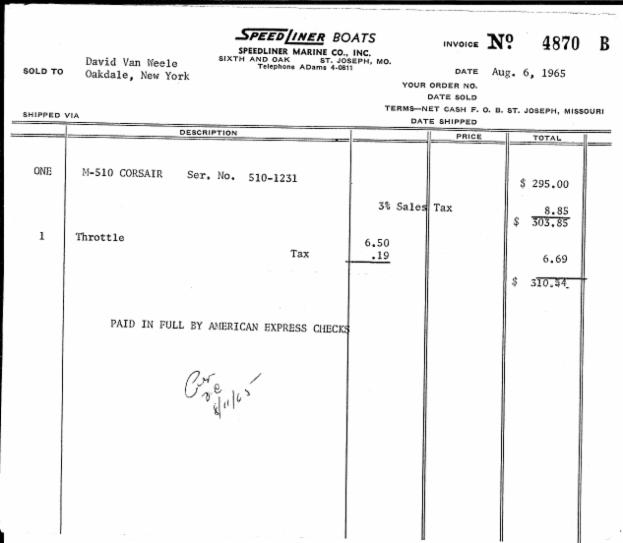 Original receipt for the 1965 Corsair 510 picked up at the Speedliner factory. 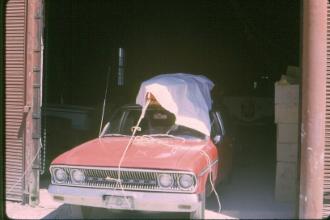 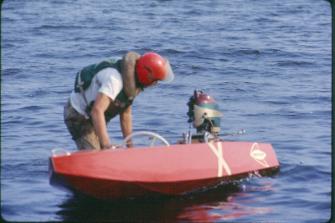 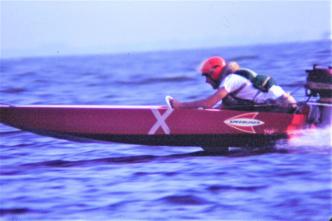 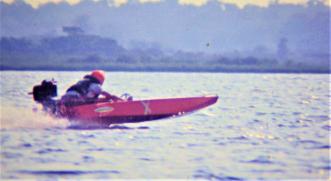 The next ten years we manufactured the A/B Aeroliner (Speedliner) and ventured into building larger versions for both CU and 36 Classes. A few Hydro's were also built of our own design. We designed a blunt nose A/B runabout with a round chine. We tested a model in a wind tunnel and found out that at 50 MPH we could generate 70 pounds of lift. The full size boat weighed only 100 pounds, fully rigged. The design would turn on a dime but watch out for a crosswind, we went swimming often. 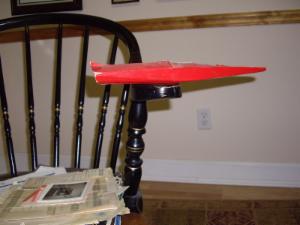 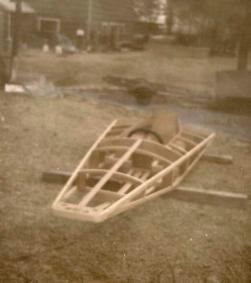 These are scanned from photo's of the blunt nose/round chine frame, 1968

Our real careers took us in differnet directions until 2006. While visiting the Mount Dora antique boat show we were bitten by the boat building bug. We still had a number of engines left, some old Keller hardware and most importantly the plans and patterns for the old Speedliner. It took a while to find suppliers for the mahogany wood, to build them just like in the 1960's but the original supplier of mahogany plywood could still supply us and we found another supplier of the 3/4 inch boards.  The first continuation boat was completed in early 2007. 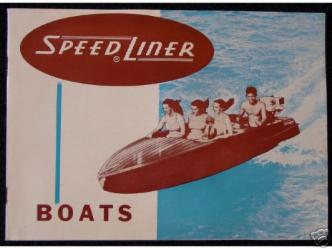 THIS IS THE COVER OF THE CATALOGUE ALAN USED WHEN HE BOUGHT HIS FIRST SPEEDLINER IN 1955. 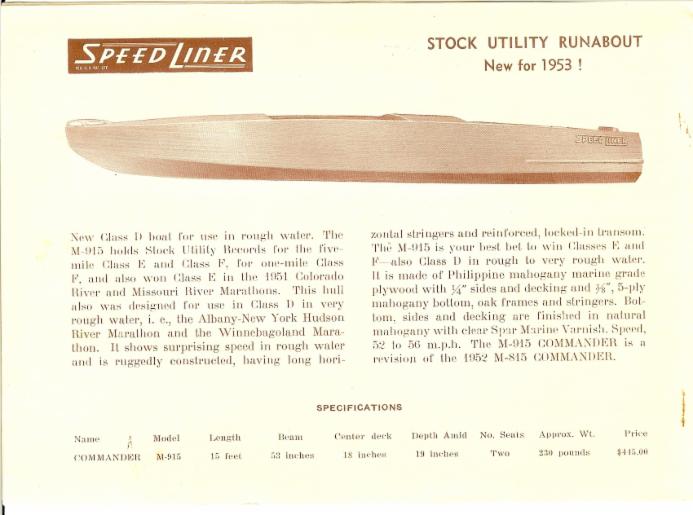 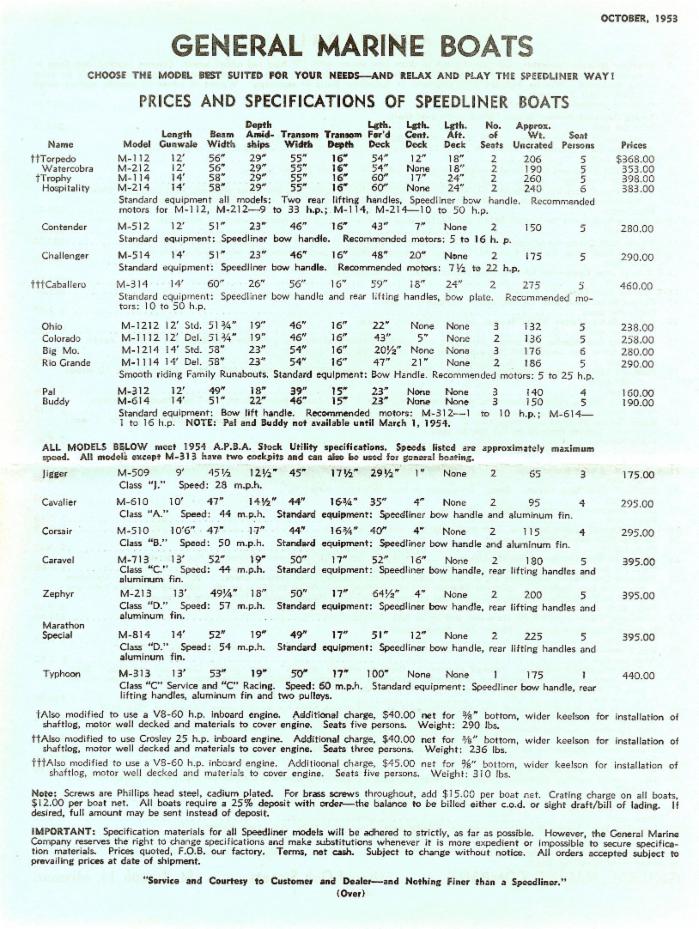 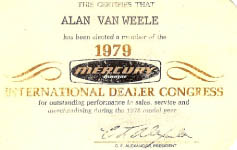 Alan's son takes to boat racing in 2010.  He makes the cover of the NBRA summer issue of Full Throttle in his first year of racing.  Alan JR is doing very well in the Doug Kay C Mod.  He also runs in the B-1 class and the D  hydro class.  On July 31, 2010 JR wins the first heat of D Hydro and finished third overall at the NBRA Nationals.  In September JR takes three third places in 250 Mod Hydro at Hillsdale with a Mercury Mark 20H we built from mostly new parts.  At the same three days of racing Alan's 6 cylinder Mercury takes a third, a first and a fourth in FEH.  This was the first time both engines were on a boat. Racing continues into 2013 with some success and a bad accident at Lucas Stadium that can be seen on You Tube.  Only a few bruises  but the boat needed a lot of work. Alan's other son Jon and Granddaughter took to the race course in 2013.

Kaylee, Alan's granddaughter had a very successful year in 2014.  She competes in ASH and CSH and in 2015 will be driving her refurbished hydro also in B1 hydro and C Mod hydro.  Further development is on going with the Electromotive ignition system being run on all of our four cylinder engines.  We have delivered other systems to other racers.  Our racing in 2014 in the D Mod and E Mod was hampered by hard luck twice putting holes in a boat and throwing a blade off our best prop that resulted in frying an engine.

Kaylee continues to improve her performance.  She won a number of heats of ASH this year and at one point she was leading in points.  She missed two races this season but still managed to finish second in points in ASH and finished well in CSH.  Alan Jr. had a difficult season with a number of damaged boats and a string of carb problems.  The electronic ignition system continues to improve so we are looking forward to next season.  We have sold a number of engines, both restored and as found.

Kaylee started out the year with a tie for first place at the NBRA race at Tunks.  The second day she hooked a buoy and went swimming for the first time.  She did race a couple of more times but her heart was just not there.  So both she and her dad, Alan Jr, took the rest of the year off.

The good news is that Alan Sr. was elected President of NBRA.  He is planning on putting his best efforts into growing the sports.  He is also President of LBRA where with a major donation from a late racing member the club hopes to purchase boats and equipment for conducting racing schools for juniors that wish to get into boat racing.

We have created a Face Book group for friends of Aeroliner Race Boats and Speedliner so visit our group and request membership.

We have created an online store for the parts and engines we have listed on this site.  In the future we will remove these items from this site and only use our store for them.  We will continue to also use eBay.  The store address is http://store.aeroliner-boats.com.

Our online store is working out very well with increasing orders.  Still working a few listing problems is our greatest challenges.  Alan has been elected to be President of both NBRA and LBRA.  Both Alan Jr and grand daughter look forward to competitive racing season as work and school permits.  Alan is finished off two hydroplane boats that were to be completed by a builder for use in the LBRA school.  The two boats have been completed and were well received at their first Novice race at Tunk's. Kaylee also did well taking a first place finish.

In July we completed the purchase of a nice collection of  Racing engines, a fishing engine, two Sid Craft 1950's runabouts and literally a ton of new and used parts to restock our growing inventory. We have started to add items from this purchase to our store located at: http://store.aeroliner-boats.com.

The last race of the NBRA was actually the first race of the 2019 racing season.  It was a very good weekend for the Aeroliner racing team.  Kaylee won CSH and Alan JR won both D Mod and E Mod hydro.  Jr also was working on his flying skills on the weather shortened weekend. 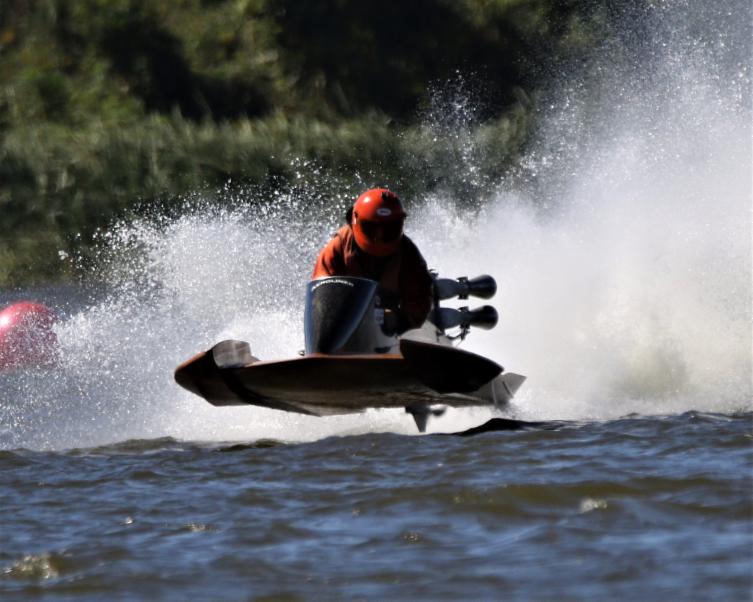 The remainder of the season saw little competition due to changing jobs and school. In the last race of the season Jon also took up flying doing a beautiful flip with reverse dive.  He was running a newly rebuilt 44XS and it picked up maybe 5 MPH over what he had been used to and with very little testing he over drove it past one of the fastest D's running just before taking to the sky.

We completed another purchase of some very interesting engines from Charlie Williams.  Alan and David drove to Seattle area in December.  It was a long, cold snowy trip but well worth the effort.  We purchased a record setting D Looper on Grant Tower which Alan has added to his collection, a KG4H Allky engine once owned by Jack Leek which he set the all time high speed of KG4H around 62 MPH, Hugh Entrop's KF9 on a 40H tower, a nice made KG7H from a fishing engine and foot, an old Evinrude KR70 class A racer that has been really gone over and the major portion of a Mark 75HA clone.  Along with six signs and twelve Mercury engine stands. Part of this purchase was the web site outboardracing.com as soon as we offically have the transfer giving us access to the site we hope to up date the content while still keeping all of the history on the site.  Link to the site is http://outboardracing.com.